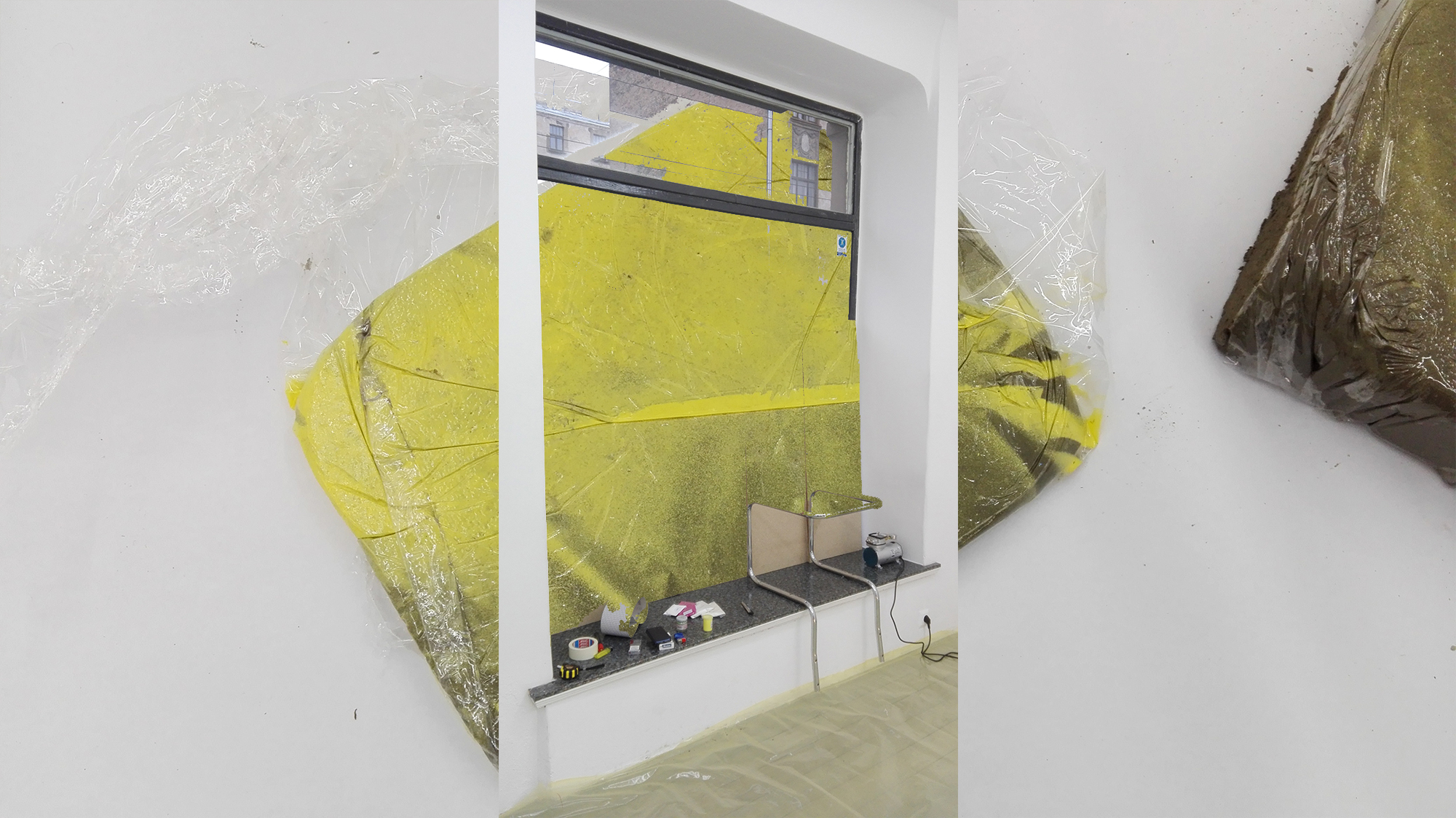 Nothing Lost, Nothing Found
(Reflections on the work of Evita Vasiljeva. Exhibition at the Ateliers, Amsterdam 17-5-16)

First view: In the distance a glimpse of a tall construction made up of several rectangular frames gives an impression of being both light/transparent and imposing.

The white wall seen through the empty frame adds to an antiseptic atmosphere. A fluorescent light placed conspicuously in front of the object suggests being in a workplace with an object still under construction. But as one gets closer, the more or less ethereal quality of an empty frame waiting to be completed changes drastically. Gray, textured surfaces, grainy and worn appear all over the frame; right behind it one discovers traces of the remains of an organic being. At this point the fluorescent light transforms this ‘workplace’ into a stage or podium. Metal rails aligned on the floor imply something mechanical. Could this be a machine of some kind? A machine on display? The idiosyncratic mixture of clean transparency and almost morbid organic traces combined with grey and moldy building materials recalls a literary masterpiece (artists are allowed to read): Franz Kafka’s In the Penal Colony.

The central interest in the penal colony focuses on an elaborate apparatus that administers capital punishment by engraving the law on the body of the condemned prisoner via a multitude of needles. A pre-Nazi example of the revenge of language on mankind. Consequently, one could conclude that Vasiljeva’s exhibit, staging its own apparatus combined with open and empty spaces, gaps, and hygienic decay, is an ode to the missing of the twentieth century. In other words, a dialectical work that explores the tension between representation and life (of the missing).

Second view: Chrome tubing, likely originating from three pieces of furniture, forms another type of frame; a small pastel object resembling a Russian Constructivist architectural model sits precariously on the edge of the tubing. Instantly one discards all pre-war obsession with language and a dialectic of the missing. Here stands a (semi-) frivolous objet trouvé. Like all readymades it uses the context of its newfound artistic environment to draw attention to its origins: not art, but industry. The inclusion of the small architectural model adds to this salute of the industrial, especially since architecture has always been more a question of industrial design than autonomous art. (not to mention the tendencies of Russian Constructivism) Therefore it can be said that the autonomous artist here, Vasiljeva, quotes from an elsewhere, that is, from at least two past artistic movements as well as industry as a major life force.

And the more one inspects other objects in her space, from molded rubber tapestries and naked steel rods to various Constructivist models, the more one senses the presence of invisible quotation marks throughout. This quiet irony falls in line with a tradition that attempts to reconcile the obvious antagonism between freedom and the universe of production, a tradition no longer concerned with the lingering dilemmas of an earlier generation – memory and the redeeming of the past.

Third view: The whole space. Objects and flat images, grey, black, occasional pastel color. The atmosphere, that of an attic or hidden laboratory. In spite of an abundance of daylight, the scattered artworks conjure something opposite, something opaque. Another impression: a teenage girl’s bedroom (A’s room?), just no poster of a pop music icon on the wall. And this overall view is the key: it negates utterly the standpoints of the previous two views. In keeping with the first view, one could have considered this ‘attic’ a parable, a scene or even a crime scene suggesting that the missing of the past will go on haunting us in the future. But taken all together, these works display no memories, no past, only the present. And whereas a museum creates a non-space for readymades, a no man’s land whereby an ordinary industrial object is neither transformed into art, nor allowed to maintain its functionality as everyday object, Vasiljeva’s space offers an entirely harmonious, natural environment that totally dismisses the idea of a tension between art and daily life or industry. Chrome tubing, rubber, and steel rods are no longer re-cycled industrial residue looking for recognition, but part of a completely new universe.

It is a dramaturgy that makes the event of this universe possible, its actuality. One is lead by the artist on an imaginary itinerary through the space without being aware of it. A mixture of raw materials, especially surface textures and sparse color, grips one’s gaze (a similar use of dramaturgy can be found in architecture as in Rem Koolhaas’ Netherlands embassy in Berlin with its signaling use of color and ramped walkway). Perception is the key here, not meaning a sense of awareness, but rather a tingling of the senses. One is stimulated to touch the curious surfaces and approach the objects, peeking into them even when they may be hermetically closed. The cohesiveness of the entire space, rather than challenged by this striking appeal to the senses, is strengthened by it.

Cohesion – opposing elements that belong together. Counterpoint. Opacity and daylight.

So finally nothing of the obsessions of the traditional avant-garde, like the ‘problem’ of language, or ethical responsibility toward the world and History. A turning one’s back on text and especially on context. Still, the pure event with the faintest of external references cannot avoid some present-day relevance: willingly or not, the artist posits opacity and incites perception, quite simply opposing the designer tendency in the arts of neo-liberal times.

Opacity and daylight. Cantatas in Dresden, a taste of Lutheran mysticism.